I Think I Might Be Having an Affair with Benedict Cumberbatch 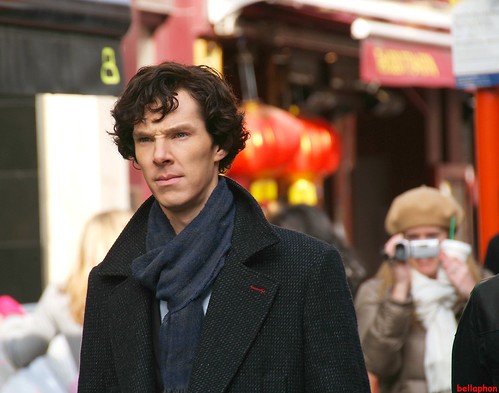 Last month I posted about sexy characters, including the delectable version of Sherlock Holmes played by the even more delectable Benedict Cumberbatch. Well, I think I may have started something, sparked something in my insane subconscious, because ever since then, I’ve been having dreams about him.

Not particularly dirty dreams (sadly), which is surprising given the sort of filth I write, but dreams about us going off solving cases together (he has the Sherlock look in my sleeping world), stopping for the occasional canoodle in dark corners and alleyways and the like. I can testify to the fact that that curly black mop is very soft and is lovely to play with, and that he smells very nice. You know, in my dreams, where all this shit is made up. Damn.

I had yet another dream this weekend, and I woke up and told my other half I thought I might be having an affair. He asked who with, and when I told him Benedict Cumberbatch, he shrugged. It seems that Benedict is so cool that most blokes wouldn’t mind their girlfriends having an affair with him. In fact, they’d probably be kinda jealous… that they weren’t the ones having the affair with him.

Lovely, lovely Benedict, appealing to men and women of all ages and sexualities, I applaud you. Also, when you next step into my slumbering brain, do you think we could have sex, please? You know, purely for research purposes… 😉 Maybe you could even bring your buddy Tom Hiddleston with you. That’d be nice, wouldn’t it?

When lonely insurance broker, Bailey, gets himself a new hobby, he ends up exchanging letters with a war zone. But he’s not expecting what happens next…

Bailey Hodgkiss is lonely and dissatisfied with his boring life as an insurance broker. In an attempt to insert some variety, he signs up to a website to write to serving soldiers. He’s put in touch with Corporal Nick Rock, and over the course of a couple of letters, the two of them strike up a friendship. They begin to divulge their secrets, including their preference for men.

Nick encourages Bailey to add more interests to his life. As a result, Bailey picks up his forgotten hobby, photography, and quickly decides to team it up with his other preferred interest, travel.

Booking a holiday to Rome is his biggest gesture towards a more exciting existence, and he eagerly looks forward to the trip. That is, until Nick says he’s coming home on leave, and it looks as though their respective trips will prevent them from meeting in person. Is there enough of a spark between them to push them to meet, or will their relationship remain on paper only?

Oh, I do love me some eye candy 😀  A couple of my favourites just now (if you want to see them all, go here, but you have been warned, you’ll be there a while!) are Benedict Cumberbatch and Tom Hiddleston. They’re both not my usual “type” I suppose, as I’m usually quite the fan of muscles and well-built chaps. But while Benedict and Tom are not scrawny, they’re not big, either. But it doesn’t matter, not one bit. They’re both tall and damn sexy, it has to be said. Tom in particular keeps sucking me into YouTube for more goodness. My favourite video, so far, is below. He’s in a suit, he’s got almost ginger hair, and that smile… *swoons* oh yeah, and he says some very funny things and he DANCES. I know some folks won’t be able to see this video due to copyright and stuff, so if you can’t, head to YouTube and search for “tom hiddleston chatty man” – you won’t regret it 😉 Oh, the hotness. I’m totally going to be writing him into one of my stories soon, it’s just got to be done.

Alice Brown has just landed her dream job. Property manager at Davenport Manor, a British stately home. It’s only a nine-month contract to cover maternity leave, but it’s the boost up the career ladder she so desperately needs.

Unfortunately, things don’t get off to the best start, when Alice finds her boss, Jeremy Davenport, in a compromising position. Far from being embarrassed by what’s happened, Jeremy turns things around on Alice and makes her out to be the one in the wrong. So when he and his best friend and head of security, Ethan Hayes, then throw an ultimatum at her, she’s so stunned and confused that she goes along with their indecent proposal.

When the dust settles and Alice has time to think about things, though, she realises that perhaps it isn’t such a bad thing. There are worse things she could be doing to advance her career, after all.

Would you like to guest blog with us? See the Blogging Schedule tab at the top of this page for information.

Alisa Anderson will be joining us June 22 and July 22. Stop in and say HI!